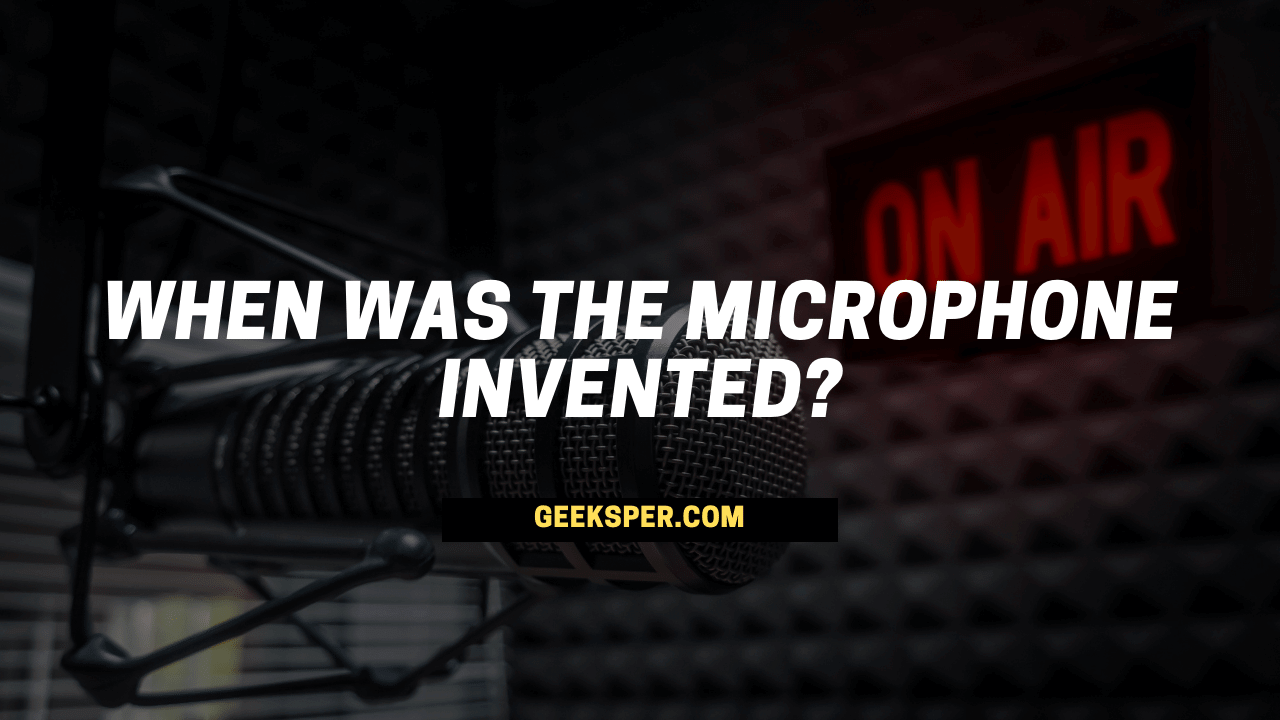 A microphone (mic) is a transducer that converts sound into an electrical signal. The Microphone was invented in 1877 by Emile Berliner. In his invention, the inventor wanted a device that would amplify sound and enable people throughout the world to hear him speak without shouting into a megaphone.

As a result of microphone discovery, people were able to communicate at a much greater distance than previously possible. In this article, I will discuss the invention of some microphones and their specific usage based on the different microphone types.

When Was the Microphone Invented, and by Whom?

The Microphone is an electronic device that converts sound into an electrical signal. Emile Berliner invented it in 1877.

However, the design of the first microphone differed somewhat from modern microphones. The carbon button micrometer was created by Thomas Edison in 1878 and improved significantly on Berliner’s invention.

Berliner immigrated to the United States when he was just 19 years old but later became known as a great entrepreneur and inventor of products that would make their way into every home and industry in the U.S

Edison’s Microphone was the first to use a magnet and diaphragm but still used electromagnets instead of permanent magnets.

In addition, the carbon microphone has good resistance to moisture and humidity, which makes it suitable for use on moving vehicles.

Why Do We Use a Microphone?

When Was the Dynamic Microphone Invented?

A dynamic microphone is also known as a moving coil. It has many applications in different fields such as public address systems, sound reinforcement systems, etc. Its two main components include the diaphragm or membrane and magnet.

The diaphragm is attached to the coil while the permanent magnet is fixed in a structure that prevents vibrations of sound waves from reaching it.

The Dynamic Microphone was invented in the early 1920s by Edward W. Kellogg and Chester H. Frost at AT&T’s Bell Laboratories. It replaced other microphones then used, such as carbon-button microphones.

Check out: What is a dynamic microphone? Working, Advantages & Disadvantages

The Dynamic Microphone was the first type of sound recording device which allowed people to capture speech with clarity. As a result, it has been used in many applications such as public broadcasting, theatrical performances, and motion pictures.

You should also check out: Top 10 Best Dynamic Microphones For Streaming

When was the Wireless Microphone Invented?

Wireless microphones are also known as cordless mics or radio mics. Wireless Microphones use the same concept as traditional wired microphones but without any wire.

Usually, wireless microphones transmit on one of several VHF and UHF frequencies to avoid interference with other devices using the same frequency range.

David Royer and Ray Butts developed the first commercially available wireless Microphone. The first system was introduced in 1956 at a show by Elvis Presley.

The Wireless Microphone has some benefits over wired microphones, such as walking around freely without being restricted by cables. Therefore no tripping hazards for the singer/speaker or crowding on stage during the performance are experienced.

Another is that wireless microphones are not bound by the length of a wire, allowing performers to have more movement during performances and giving them freedom.

Why use Wireless Microphones?

When Was the Carbon Microphone Invented?

Condenser microphones are also known as capacitor mics. As a result of their design, they are very sensitive to sound. The condenser comes from storing electrical energy in an electric field between two conductive surfaces (i.e., plates) separated by an air gap.

The Carbon Microphone is a type of Condenser microphone that Thomas Edison discovered in the 1876s.

The carbon microphone had significant advantages over earlier sound recording devices such as the phonograph. It did not require horns and could be used with any loud-speaking device, including telephones and hearing aids. It also required less maintenance and was less expensive, thus being ideal for telephones.

The Carbon Microphone has been used in the past by many folks, such as musicians who wanted to record their voices or sounds using phonographs because it can pick up sound very well. It is also widely used today in many applications, including public address systems, broadcasting studios, and recording amplified musical instruments.

Who Invented the Electret Microphone?

An electret microphone is a condenser microphone containing permanently charged (or polarized) dielectric material. This design, patented and first used for video cameras in the 1960s by RCA Corporation, became widely used for carbon microphones.

The electret microphone was invented in 1962 at Bell Laboratories by James West together with Michael Stockham.

This mic is widely used because it has high sensitivity, better impedance matching to the receiver, and very strong resistance against humidity. Electret microphone can charge it in two ways: using an alternating current or direct voltage. Power does not have to pass through its capacitance, unlike other condenser microphones.

The electret microphone has been used in a lot of applications such as recorders and telephones.

Why Use the Electret Microphone?

When Was the Microphone Stand Invented?

Garrett Morgan first invented the microphone stand in 1914. This device is used to hold microphones and other recording equipment at a specific height for the performer or speaker to be easily heard with clarity without any background noise being picked up on it.

This invention has been widely used in many applications such as public address systems, broadcasting studios, and for recording amplified musical instruments.

Also check: How To Set Up A Wireless Microphone System? [Step by Step Guide]

Benefits of using a microphone stand

There will always be some new types of products that you will see in the market with upgraded features and benefits. You should stay up to date with the new technology as that might help you make your work better.

Do you have any questions related to the invention of the microphone? Do let me know in the comments below. Until then check out some of my other articles as well:
MXL 990 Review: Microphone Features, Performance, Pros & Cons
Fifine K669B USB Microphone Review: Features, Pros, & Cons
Top 5 Best Mic For Discord
Top 7 Best USB Microphones Under $100
What is a Microphone Preamp? Comprehensive Guide