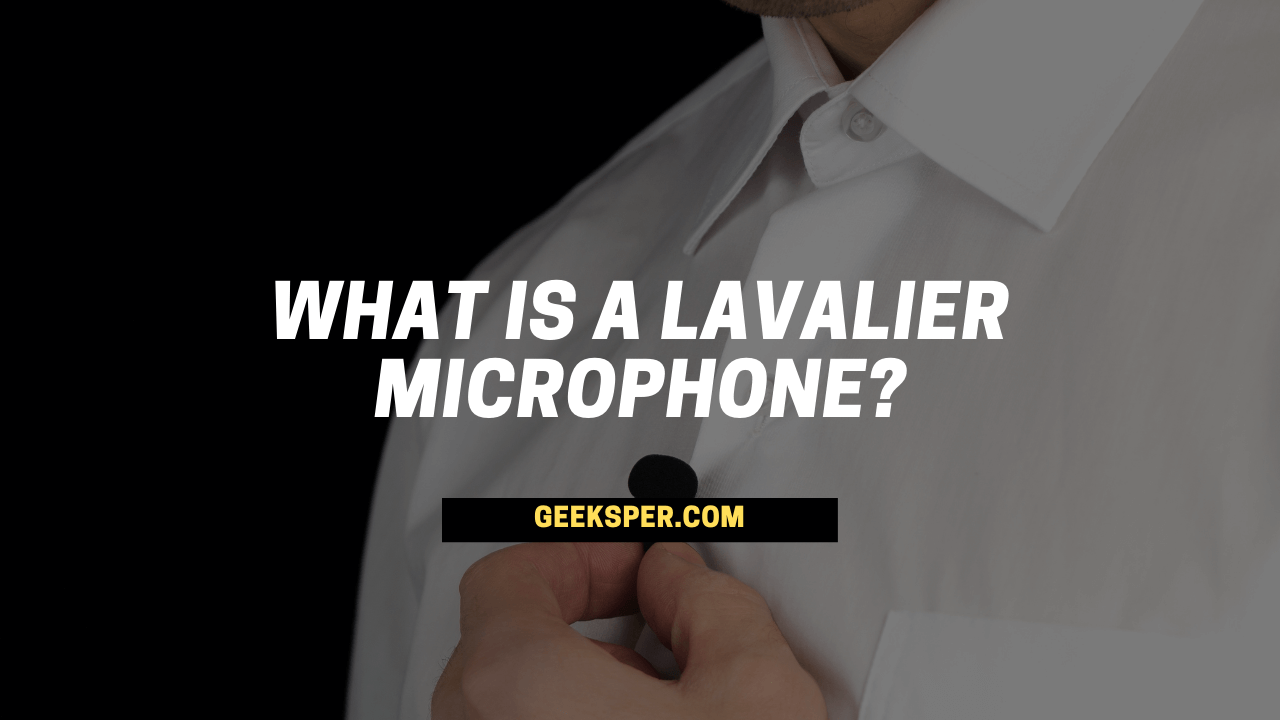 Lavalier microphones are small and portable microphones that clip to the clothing of a speaker. They can either be wired or wireless and usually require an external power supply.

The two most common types of lavalier microphones are Lapel microphone, which is clipped on a person’s shirt, and Clip-on Microphone, which is attached to the collar or lapel of a jacket. Lavaliers are used for TV interviews, stage performances, lectures, seminars, and other presentations where voice amplification may be necessary, but space is limited.

What is a Lavalier Microphone?

As stated before, lavalier microphones are small and portable microphones that clip to a speaker’s clothing. They can either be wired or wireless and usually require an external power supply.

Lapel microphone – Lapel mikes are typically secured using a lapel clip attached to the presenter’s shirt, jacket sleeve, or tie. In contrast, Clip-on mikes use attachment clips that go around the wearer’s collar or lapels.

The two most common types of lavalier microphones are Lapel microphone, which is clipped on a person’s shirt, and Clip-on Microphone, which is attached to the collar or lapel of a jacket. Lavaliers are used for TV interviews, stage performances, lectures, seminars, and other presentations where voice amplification may be necessary, but space is limited.

How Does Lavalier Microphone Work?

Lavalier microphones use a small plastic capsule that dangles from the person speaking like an earring. Inside this capsule are two thin diaphragms (a vibrating membrane) separated by a tiny gap.

A battery powers a very small microphone circuit board hidden within the back of the cylinder. This circuit board amplifies sounds via the vibrations in the diaphragm to drive an external headphone or speaker for public address applications. For example, in TV interviews, you will see the lavaliers clipped on someone’s shirt using a lapel pin. The microphone is then attached to a wireless transmitter that transmits the sound signal to the audio mixer, which generates a TV program’s final mix.

What are the Advantages and Disadvantages of a Lavalier Microphone?

1-Lavalier microphones can deliver clear, presentable voice even in the noisiest places.

5-Cheap compared with other kinds of microphones

6-The lavalier mike comes in different colors such as black, red, etc

8-They are used for any occasion such as stage shows, TV interviews, etc.

1-The lavalier microphones don’t work well in a loud environment.

2-Sometimes, the lavalier microphones are clipped on tight clothes, and that causes an effect on the sound quality.

3-There is a problem with wireless lavalier microphones as their batteries die out quickly, and they may interfere with other devices. The batteries can also be difficult to change in some cases.

4-They are quite expensive

The first wired microphones were Sony’s pioneering Cardioid lavs unveiled in 1963. Still, it wasn’t until the early 1980s that the small lapel mike became an accepted tool in film and broadcast journalism and later for live music venues.

Citizens have also used lavalier microphones to record police abuse and brutality during protests, arrests, or other interactions with law enforcement. For example, in 2015, there was widespread usage of lavalier-worn cameras during rallies showing just how important they are to people.

Lavalier microphones are also used in live theatre and theatrical performances. World-renowned cabaret performer Bobby Short used a lavalier microphone to allow patrons at his nightclub to act to hear his quiet voice better. Lavalier mics have become an integral part of every stage performance/theatre play as they help the audience understand the actors’ character more clearly without any problem.

Some people make a mistake by using the term lavalier when they actually mean lapel microphone. The first distinction between these two kinds of mikes is that while both picks up sound from its surroundings, it does so for different reasons:

Lapel microphones are designed to capture the voice(s) of the actor(s) who is in performance. In contrast, lavalier microphones are meant to capture sounds emanate from the rear and/or side walls or even from behind the audience.

Lapel microphones, on the other hand, work by capturing soundwaves and converting them into electric signals through contact with a microphone capsule built within it.

This capsule consists of diaphragms thinner than human hair, producing sound vibrations when there are changing air currents due to speak. In addition, these diaphragms serve as microphones wherein they catch an audio signal that’s then converted into electrical energy for amplification.

On the other hand, lavaliers don’t have any contact between its capsules and mouth; instead, it uses a wireless receiver to change the current energy into sound.

Difference Between Lavalier and Lapel Microphones

There is more than just one difference between lavalier and lapel microphones, such as use, appearance, types, etc. First of all, let’s look at their core functions:

While lavaliers capture sounds coming from other regions of the stage or auditorium during a performance, lapels focus on capturing the voice of an actor/actress during his/her part without drowning out other voices in the play with its powerful amplification capabilities.

In terms of size and design differences, lavalier mikes are smaller in size than lapel mikes because they don’t contact the mouth. In comparison, lapel mikes are bigger than lavalier microphones due to their contact with the mouth.

The list of differences between these two different kinds of mikes is on how they’re worn:  Lapel mikes are supposed to be clipped on a shirt or collar so that they can pick up voice from an actor’s mouth while Cavaliers designed, as mentioned above, are in such a way that it doesn’t have any contact with the mouth. Instead, it uses a wireless receiver which then converts current energy into sound waves.

Lavalier also doesn’t use any clips for fastening purposes, but they often come with some tapes for fixing them onto clothes, making them quite easy to wear.

I hope the above-given article would have helped you understand more about the lavalier microphone and its work. You can even check out the working of other microphones on our blog as well.

Do you have any questions related to the lavalier microphone? If yes, do let me know in the comments below.
How To Set Up A Wireless Microphone System? [Step by Step Guide]
What Is an Audio Interface? [Detailed Guide]
Which Microphone Do They Use?
How does AutoTune Works?: The Simple and Step-By-Step Guide
How to Record Binaural Audio: The Complete Guide