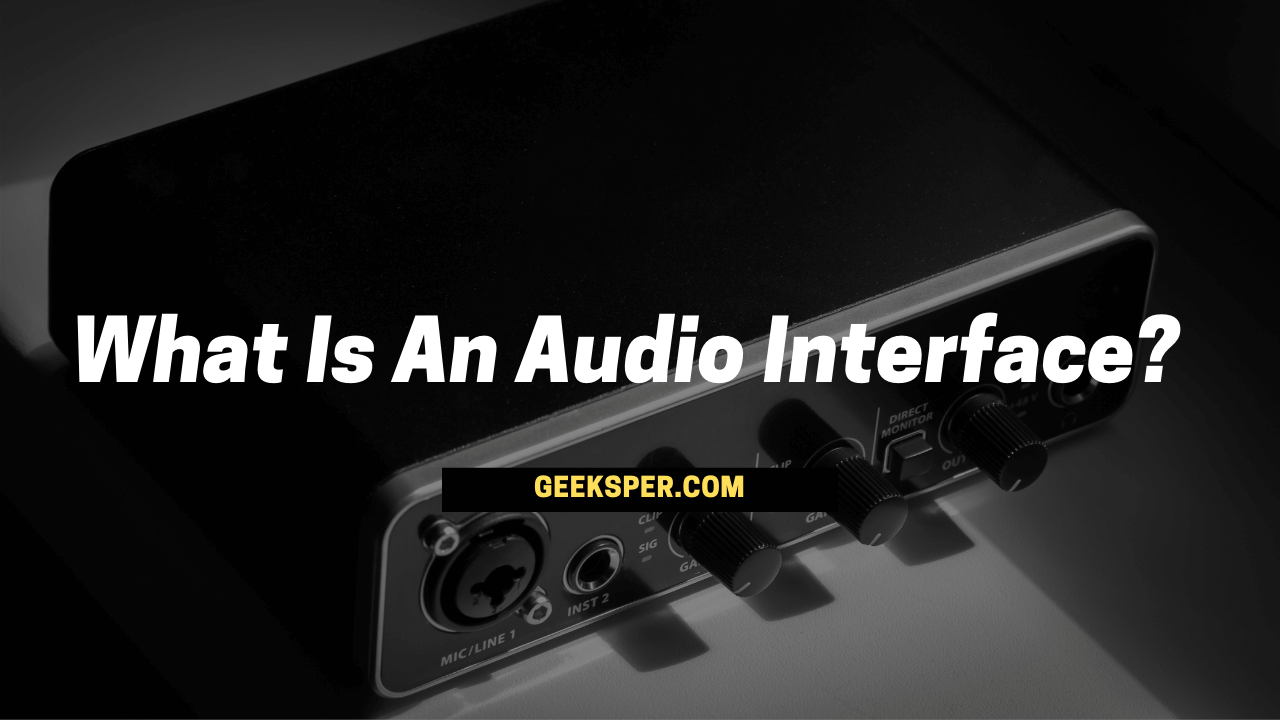 An audio interface is a device that allows you to connect your instruments and microphones to your computer. It converts the analog signal from these devices into digital signals for use in recording, editing, or mixing. Audio interfaces are often used with recording software such as Pro Tools, Logic Pro X, Cubase, and Ableton Live.

What is an audio interface? What does it do, and how does it work? This post will help you know everything you want to know about the Audio Interface.

What Is An Audio Interface?

An audio interface converts an analog audio signal into a digital one. Unlike your computer, which only reads digital signals, the analog-to-digital conversion allows you to use your computer to process sound in ways that it otherwise couldn’t handle by itself.

Moreover, because the conversion is done outside of the computer and connected hardware (bypassing whatever’s already running on the machine), there are no conflicts with preexisting software or processes.

This means that when you’re recording audio from a microphone to your computer, what’s being sent over USB 2.0 isn’t just electrical signals—it’s also metadata (which is what allows them to be converted into digital audio). This type of conversion is what makes an interface different from just plugging in a mic or instrument directly into the input jack on your sound card—and what allows it to produce much better-quality analog-to-digital recordings.

The objective of an audio interface is to convert what we normally hear, music, into a digital language that’s understandable for your laptop or desktop computer. Computers understand 0s and 1s, the binary language that computers use so well. An audio interface allows us to turn what we listen to every day (music) into something that our computers can digest and playback for us in the form of high-quality audio or MIDI sound.

Why Do I Need an Audio Interface?

It would help if you had an interface so that your Audio Interface can filter out the sound and noise from your speakers and microphones while also amplifying the volumes of what you are playing or singing into.

Audio interfaces allow for a studio-like environment to be created at home, which would be only possible if every instrument in this scenario had its own microphone.

The purpose of an audio interface is to provide a buffer between your instruments and your speakers.

An audio interface’s job is to take a signal from external instruments like guitar or keys, and then it feeds the signal into something with the ability to recreate that sound (speakers, headphones). Audio interfaces can also be used as power sources for some electronic devices. Either electrical outlets or batteries can generate power.

The importance of having an audio interface in your musical process comes down mostly to how much you want your music inputted into different pieces of gear, both live and in-studio settings; if you’re playing all live throughout a show, then this probably isn’t something you’ll need right off the bat. Whereas if you need to set up many different microphones and whatnot, then this would be great.

You can also use them live in conjunction with the audio from your instruments or vocals if you’re using software or pedals to place effects on it as well. They must always be connected to what is called “phantom power,” which essentially allows an electric current to flow through something without having wires directly plugged into it; this is used for things such as condenser microphones, mainly what you’d see used during studio recordings.

Do I Need an Audio Interface for Music Production?

Yes, you’ll need an audio interface if you’re planning on recording. This means that what you’re recording (your vocals or instruments) needs to be connected to the hardware of your computer itself for what you play/sing to go onto what’s being recorded.

Is an Audio Interface the Same as a Sound Card?

Yes, what I probably mean by what is an audio interface is a sound card. They are the same thing and what most people usually call them.

You’ll need one for any recording equipment, even if it’s something as simple as what you’re using to record your voice on Audacity or what you have. This basically means that you plug headphones into your computer either through the headphone jack or microphone jack (depending on what you’re planning on the recording) for what’s playing/being recorded to be heard.

Audio Interface is what you plug into the amp; it just goes straight to recording what’s being played into your computer (assuming there isn’t any other hardware). Sound Card is what you put on a computer that allows sounds to play through speakers.

If you are looking to buy an audio interface then here are some of the best ones that you can try. If you need a well-detailed post on the best audio interface with information and research then do let me know.

I hope you would have understood everything you need to know about an audio interface in the easiest way. You can get yourself one of the above-given audio interfaces as they are the best ones.

Do you have anything else to ask about an audio interface? If yes, do let me know in the comments below. Until then, read some of my other articles:
How AutoTune Works?: The Simple and Step-By-Step Guide
How to Record Binaural Audio: The Complete Guide
What is a Ribbon Microphone? How does it work? Features? Advantages, Disadvantages, and Usage
What Does a Shock Mount Do for a Mic?
How to Connect Multiple Microphones to a Computer?