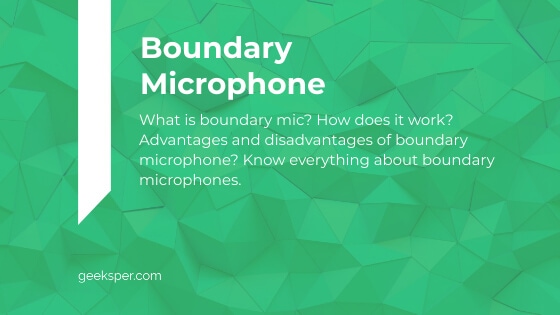 It would be unless to say, how rapidly the world of technology has been grown to date. Every new invention or update brings up some mysteries with us. The best thing about improving technology is that it had made all things much easier now.

Neither we had to wait too much for connecting with people nor we had to stay at one place for watching out on our favorite programs now.

Boundary microphones is a class that is being overlooked to date. It is not that it is not been so important but the thing is the majority of the people are unaware of its benefits.

It is flat-lying and inconspicuous by design product may lack somewhere as appearance but it is a prestige for those large-diaphragm counterparts that are often being photographed in the world of most favored culturally iconic singers and entertainers.

What is a Boundary Microphone?

Boundary Microphone is one of the finest integrations in the technology that makes it quite easier for the users to capture your audios in the best possible ways.

It is just like a condenser microphone more similar to a small diaphragm with a twist that seems to be quite helpful in certain applications such as in meetings, recording sounds from specific instruments, in churches, or at different places.

You might be eager to know what’s exactly the twist involved here. Well…

The capsule and the internal circuits of the Boundary Microphone are often being mounted into the housing so that it could lay on there or can be easily attached to the flat surface. This equipment is quite small and can be easily fit in the palm of your hand.

The best thing about these boundary microphones is that they can easily record clear and crisp sounds from greater distances usually along with a cardioid or super-cardioid polar pattern.

The boundary microphones are often being used by local entertainers or iconic singers or even public servants as well.

These microphones are specifically being used for picking up rooms with multiple audio sources. If you are willing to install a boundary microphone, a flat surface usually a wall, table, or ceiling is a preferable place.

A boundary mic is designed to pick up the sound being reflected on the surface it’s on and that’s why using a flat surface for its installation would be a great option.

Working of a boundary microphone

A boundary microphone is a small diaphragm condenser mic mounted in a housing that directs the diaphragm parallel to the surface on which it is mounted.

The physics behind the phenomenon of working of boundary microphone is derived from the principles of basic fluid dynamics and aerodynamics.

Whenever we have to record a soloist or small musical ensemble along with the room acoustics, a boundary microphone perfectly prevents the interferences between the direct and reflected sounds. The resultant sound thus recorded is a natural sound with a flatter frequency response.

What is a boundary microphone used for?

These microphones are usually being placed on a table around 2ft in front of the person who is speaking.

The boundary microphones are quite good at catching different sounds in the surroundings clearer and crisper.

Boundary microphones are well known for capturing clearer and crisper audio outputs in reverberant rooms and from multiple sources as well. It is the best source one can use for capturing sounds from a room.

The introduction of boundary microphones has made it quite easier for the users to capture sounds from different open or closed areas effectively.

The boundary microphones are quite compact and can be easily installed on different flat surfaces.

I have added the top 10 best boundary microphones as well. That will make most of your work to pick the best microphone for you much easier.

Till then, you can also read this: